Gethsemane and the Cross: The Tomb and the New Man

Not from fear of death did terror enter Your heart. Your heartbeat was reviving the heavens, raising the earth, establishing the principle of life for every living thing.
Glory to Him who stood a stone's throw from His chosen disciples;

Glory to Him who stood dejected till death with a deep inward sadness, yet living still;

Glory to Him who, though a beloved Son, knelt on the ground before the Father to whom all prayers are lifted;

Glory to him who was struck to the ground with his face marred yet who owns the heavenly face before which all heavenly hosts are awed;

Glory to Him who, in agony of soul and bitter suffering, sweated great drops of blood from His forehead, because of the weariness and grief that had ravaged his flesh during his hour of trial.

He lives, and is the giver of life.

Not from fear of death did terror enter Your heart. Your heartbeat was reviving the heavens, raising the earth, establishing the principle of life for every living thing. Nor did terror enter Your heart out of fear of the pain and suffering to come, for You are the Comforter of those who suffer, the one who wipes away every tear, and strengthens the heart of the distressed. You bear the pain of every soul that takes refuge in Your bosom.

No alarm arose in You at the approach of an enemy who had the power of death in his hands, for it was You who terrorized him and overcame his power. With Your cross you bound and threw him into the eternal fire that devours all enemies of truth, all liars, and the father of lies. You are the One and Only present Eternal Truth who judges and brings to final annihilation the evil that has degraded and humiliated mankind.

I discovered Your mystery. The source of Your grief was revealed to me, by which You attained the degree of death without dying. I realized the extent of your spiritual suffering and torture. Indeed, I realized the mystery of Your face that was marred by the earth's dust and by the endless flowing of tears and the gushing sweat, like blood.

I learned from You the reason for the fear that took complete hold of You and entered deep into Your heart.

I also learned the mystery of the fear of the pain that gripped Your soul, not Your flesh, and the mystery of the suffering that tormented Your spirit, and the torture You suffered from being cut off from Your Father's loe. You suffered alone, for it was the Father's will to bruise You with grief (Is. 53:10.) Why should You therefore not grieve the grief of those dying without a saviour?

I got to know the measure of the pain you experienced; the tears, the broken heart, and the fear of what was about to happen. You were forsaken by the Father. It was His will to abandon You, a beloved Son of the Father.

Indeed, I got to know, I was convinced, and the mystery was revealed to me:

Your Father made You bear the full weight of all the sins of mankind, though You were innocent of them all. From the very beginning, in the eternal council chamber of the Father, You accepted the responsibility of bearing them. Because of this, You submitted to the incarnation, and bore it according to Your will and Your Father's will.

Yet when I saw the significance of the Father's inevitable hostility to that sin, I was horrified. For how could the Father be so unyielding when You were one with Him, present in His fatherly bosom, and came from Him? If the sin of blasphemy is the mother of sins, how could You bear it in Your flesh an dhow could You stand with it before Your Father? How could You be as one who denies Him? What terror and what fear must have overtaken You? Was it possible? Did the Father allow this?

Yes! When He allowed mankind's sins to be placed on You in order to redeem them, He did allow it! What rending of Your soul! How could You stand before Him in your holy purity, bearing the sin of fornication as if you were an adulterer, indeed the chief of all the world's adulterers?

Now, I know Your heartbreak and the reason Your face was covered in dust so as not to be seen by the Father, and the mystery of those tears and sweat flowing like blood! The load must have been unbearable as the Father's hand was laid on You. Why didn't You throw Yourself to the ground and let courage escape You, deceived by the familiarity linking You to Your Father, though it remained in You?

Do You bear man's lies and assume his sins, his deceptions, his denial of turth, and his rejection of what is right whilst being at the same the embodiment of Righteousness and Truth? How could You stand before the Father as a liar and as the representative of all liars? Did You bear every crime that the devil inspired in man? Do You take on the nature of a murderer in order to bear the murders he committed, then do You stand before the Father as if You were the murderer when You are Yourself actually their Father and Giver of Life? How can this be?

You stood, dear Master, as a burglar or thief before Your Father, assuming the identity of the ungodly. It was because of this that You were able to release the thief crucified with You--the first sinner to gain acquittal. I know now the reason for which the Apostle Paul said, "And to one who does not work, but trusts him who justifies the ungodly, his faith is reckoned as righteousness" (Romans 4:5.) Why? Because, he believed in the Cross and the works of Him who was crucified.

I know now why You stayed kneeling, crying out with tears to the Almighty to save You and take away the cup, although He did not. Your meek and gentle soul was broken by the terror of mankind's sins! But it was for this very hour that You came. For the sake of Man's sins, You became flesh, drank the defiled cup, bore his burden of defilement and were judged as a sinner!

Had it not been for the rejection that wounded Your heart, that You bore alone as a sinner and as the father all sinners, under the Father's sentence, You would not have been able to die and descend in to the grace for man's sins and remain buried for three days, fulfilling the punishment for the sin of mankind. Mankind would not have been absolved from sin and released from its sentence and its curse, which is death. This is the power of the cross and the power of Him who was cruficied.

You were the Almighty, the Master and the Omnipotent One. In You the attributes of God are fully revealed. You are the One who has known throughout the Old Testament as "the Almighty." This is God's omnipotence that was revealed to its fullest extent on the cross.

This, then, is the new man's value!

Master, you rose on the third day and exposed Annas, Caiphas, and the devil, discarding the sin You bore in Your flesh at the cross. You cleansed man from his uncleanness, burying it with the old, sin-laden body that You took from him. Sin pierced Your hands and feet and side on the cross, in the nails and the spear, causing Your Divine Blood to flow out like a river. A man's body is therefore baptized and sanctified with blood, and acquires the eternal life that is in Him. It descends into the tomb, where death has been trampled under Your feet, and is resurrected pure and sanctified in Your resurrection. Thereafter, death has no power over it; it is a new creation through the Spirit, and shares the glory that is Yours, the glory which You laid down through the incarnation, the cross and the tomb, but which returned as You returned to the Father. In this You bore new man in Your body ot offer it, sinless, to Your Father. You reconciled God and manthrough Your bloodo that was shed and created an eternal redemption with Your Father and gave man eternal life in You.

Thus, in the resurrected body of Christ, man is recreated and raised to sit on the Father's right hand in the highest heavens, just as Christ sat in the glory of eternal life. 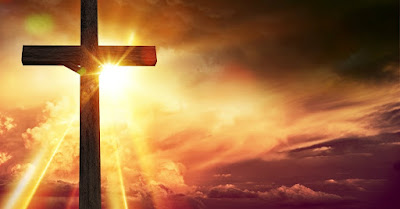